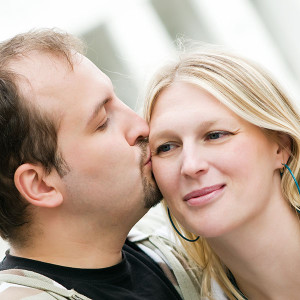 Marriage is important to God. Before any other institutions, prior to forming of he nations of the world and a long time before the church was born, God established marriage. The first humans were created as man and woman, and God revealed himself in the relationship between them. Marriage gave evidence of the unity in the Trinity and the love of God became visible.

All things created by God were good. But it was not good that the man should be alone (Genesis 2.18). Together male and female were created to be an image of God, as the Bible says: “So God created man in his own image, in the image of God created he him; male and female created he them” (Genesis 1.27). Both man and woman were absolutely essential to form a true image of the Creator.

They were created with the same value. However, they possessed different qualities and complemented one another. Lifelong loyalty and sincere love between man and woman mirrored the faithfulness and love of God. The image of God becomes visible in spouses that are faithful and committed to love.

Therefore marriage is a lot more than an agreement, a contract or a way of living
together. The Bible says that spouses are bound to one another by covenant (Malachi
2.14). Today many people have no idea about what a covenant really is, but this does not change the fact that marriage is a covenant relationship. The covenant binds each part to help and support the other far beyond the implications of an agreement or a contract. Two parts of an agreement are committed to make an even contribution. Failure of one part is synonymous with breach of contract and implies that the other is exempted from his or her legal obligations. On the contrary, a covenant demands that both parts yield a hundred per cent based on their own abilities.

Through the NATO covenant different nations are committed to military support each other in danger of war. This obligation is totally independent of any service the afflicted nation may give in return. During the cold war Norway was totally dependent on military enforcements from the much bigger and stronger nation USA in case of a possible Soviet invasion of Norwegian territory. The Americans could not expect a corresponding contribution from Norwegian forces if enemies were threatening American national interests.

Generally most newlyweds experience that both parts make an even contribution to the
fellowship. However, in a lifelong marriage there may be periods when one spouse needs help from the other without ability to return the service. The covenant is a safeguard to secure the weaker part necessary help, support and love for better and for worse, in sickness and in health.

The fall of man was a tragedy that affected marriage as well. The image of God is obscured when we seek our own interests at the sacrifice of others. However, we are  still created in the image of God. He has thoughts of peace, and not of evil, for our marriages. He blessed the first married couple and ordered them to be fruitful (Genesis 1.28). His blessing is still being poured over married couples and their children.