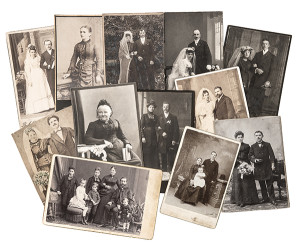 In several Norwegian fairy tales Espen Cinderlad wins the princess and half the kingdom and lives happily ever after. Today many would claim that they would live happily forever as well, if only they met their perfect match. In the old days parents and potential in-laws decided who should marry whom. In modern times we take for granted that a marriage is to be based on romantic love.

As late as in 1863 Norwegian legislation still demanded parental consent as a prerequisite for marriage. In the old peasant culture other considerations were given preference to romantic feelings in the choice of spouse. The woman needed a man as a life insurance, and a wife was required for the man to run the farm. For the man the question was about whom he chose to be his most trusted co-worker. A sweet and sympathetic girl was of little
help if she could not work.

However, it was not reasons of running the farm, nor economical issues that made God create Eve. Adam had everything he needed in Paradise and was not obligated to hard work for a living. Nevertheless, the Bible says that it was not good that the man should be alone. Adam needed the woman because God had created him to love. The first marriage was not only a purposeful social institution. Marriage gave opportunities for feelings of passion and a loving relationship between two spouses created by God.

How did Adam manage to find the perfect match? He did not have to search. God not only created the woman, but led her to the man as well. The Lord knew better than Adam himself what kind of woman that was best suited to be his wife. When teaching young people about marriage we assure them that the Lord not only can but also will help them to find a good spouse.

In our society we enjoy great freedom and we decide on our own whom we want to marry. The Bible talks about finding a spouse (Proverbs 18.22). However, finding and choosing implies great responsibility as well, and the Lord wants to lead us and show us the best thing to do. In addition to pray for the Lord’s leading we encourage young people
to ask themselves several critical questions before they throw themselves into a romantic relationship.

Has, for instance, the person devoted his or her life to the Lord? Does this person accept the way he or she is created in the image of God? Does the potential spouse have a settled attitude to the past and a healthy relationship to authorities? Does he or she easily forgive? Does the person have self control and defined goals for the future? Has he/she given his/her economy, personal belongings and productivity to the Lord? Will the potential spouse become a good father or mother? Is the person a whole human being or does he/she come to you only to cover one’s own unfulfilled needs?

Nobody scores a hundred percent in all these questions, we do all have a potential for growth and improvement. However, in when intoxicated by romantic feelings, it may be useful to use the head as well as our feelings when making such an important decision. The period as a single is also a possibility to grow as a person. We should ask ourselves the same questions and prepare to become the best possible spouse to the person we are going to marry in future.

What about those of us who are already married? In hindsight we may ask if we have married on a shaky foundation. If our marriage is less than perfect, we may be tempted to assume that we have married the wrong person. In these days many believe that the only solution is found in divorce and marrying someone else, but the author Zig Ziglar suggests
another attitude:

The real question is not about finding the perfect match or being married to the ideal spouse, but whether or not we are willing to become the right person to the one we marry.